Beautiful Ireland has been fighting invaders since before recorded history. In 796 AD, the Vikings became Ireland’s most brutal trespassers. Today, if you visit the glorious 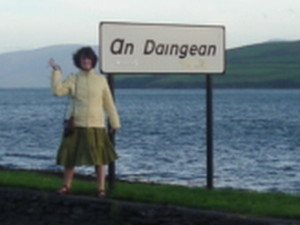 Dingle Peninsula (and I surely hope you do), you will see the phenomenen of the beehive huts.

These small stone beehives were built by the Irish as fortresses against the Vikings. When I visited them, an old man told me, “Yes, the Vikings were the worst of the invaders. For sport, they tossed Irish babies from spear to spear in sight of the entire village.”

The Normans took over Ireland in 1169. If you visit Kinsale in County Cork, you will see many examples of Norman architecture.

In 1541, King Henry 8th was named the official King of Ireland after England’s invasion. He hated the Catholic Church and started the Church of England because the Pope wouldn’t let him dump his childless wife, Catherine, in order to marry Anne Boleyn

A century later, the Irish Rebellion against England altered things. Once again, Ireland was able to function as a Catholic country.

But in 1649, Oliver Cromwell reversed things once again. He invaded Ireland and made it impossible for Irish Catholics to own land or property. It was during this time that England bled Ireland dry of trees (for their ships) and food (for their bellies). Oliver was descended from Thomas Cromwell’s sister. Thomas had been Henry’s lackey. Don’t get confused.

It wasn’t until 1919 that the Irish finally rid themselves of British control (except in the North) when the Irish Republic army began a guerilla war with the English security forces. They declared their own sovereignty in 1921.

When I visited Dublin Castle, Queen Elizabeth was scheduled to visit Ireland the following month. In the magnificent throne room, this is what the guide said:

“The bitch will never sit on that throne.”