Lace Curtain is finally coming to life this March. I got stuck for a while, but now that it’s finished, it’s fun to be picking the cover art, etc. I’m psyched. I’ll show you the cover as soon as it’s

I needed to change a large character in the book, and I was stymied for a bit. When I went to Sicily, our wonderful tour guide, Flavia, asked us to let the world know that her beautiful country offered much more than pizza and the Mafia. I had written a criminal character into the book and needed to fix that in order to remain true to my promise to Flavia.

Actually, the Mafia didn’t exist in 1870 when Lace Curtain takes place. It was more a result of World War Two.

Shanty Gold has been short listed by Readers’ Favorite Awards as Best Historical Novel of 2016. If you pray, send one to me, won’t you? And if you don’t pray, send me good energy or something. But if your prayers are being primarily dedicated to the defeat of Donald Trump, pray on. I want a success for my novels, but not to supersede the need to get #45 out of the White House.

Winning a prize is important to me, but defeating that blow-hard takes precedence.

What a time we live in, right?

Let’s move to Ireland. Oh, I forgot—I explored that when “W” was elected the second time, but I needed health insurance.

This is a picture of me in Ireland at the shrine of St. Kevin of Glendalough. Supposedly, if your fingers can touch around this cross, good luck will follow you. Mine did, so I want to share some of that luck with you, dear reader. 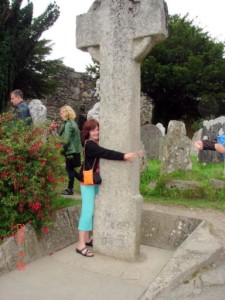