Before there was Me, Too–Before Fake News–Before tribal politics, the seeds were being planted… 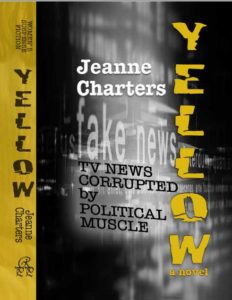 A principled news director, a ruthless female television manager known as The Barracuda, and a corporate manager with a gambling addiction set the stage for a thriller where manipulation of the news for personal gain trumps journalistic integrity.

When she learns from her top reporter that the Pennsylvania Governor has hired a mob-owned construction company to repair a bridge in Pittsburgh, she plans to report it.

However, her unscrupulous station manager orders her to “leave it alone.” But when a reporter’s probe reveals dangerous truths about the construction company’s shoddy work, Finley opts to buck the system and run the stories. Thus, a deadly conflict is set in motion.

Although Finley’s reputation is impeccable, making it difficult to fire her, the station manager and corporate president conspire to have her eliminated.

Will Finley emerge with the truth — and her life — intact?

A veteran of broadcast television, Charters draws from her own experiences to inform the character development and story arc, lending authenticity to every page.

What readers are saying about Yellow…