One of my biggest surprises in writing these novels was the state of medicine in the mid-20th century.

Women in Boston were dying in droves from something called childbed fever because doctors didn’t know about germs. They’d go from an autopsy to a delivery without ever washing their instruments.

In Lace Curtain, my research uncovered the widespread use of laudanum for “keeping women under control.”

For instance, if a woman nagged her husband or had a wee nip too much at a party, she would be trotted off to a doctor (male, of course) and get a bottle of laudanum.

Laudanum is tincture of opium and is highly addictive, but it was freely prescribed in 1870 when Nellie Kelly lived. Once doctors realized that it could kill, they found a new drug to prescribe.

It was called heroin. 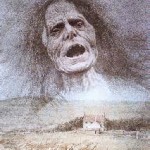