When the Irish came to America during the time of Shanty Gold,, they were met with prejudice and rejection. N.I.N.A. (No Irish Need Apply) signs covered store windows throughout the major Northeastern cities like New York, Boston and Philadelphia.

That was understandable. The Great Famine had driven a million Irish from their homeland and though some went to Canada, the great majority came to America. Americans didn’t want “illiterate micks” taking jobs needed to feed their families. Can you blame them?

Time and education healed that problem—partly because the Irish “looked like us.”

I saw the movie, “Selma” yesterday. Its brutality devastated me. It was 1965. Horrified, I watched Americans beat other Americans, black and white, to death with billy clubs. The objective? To keep blacks from voting.

My horror was compounded by the news that a man in Chapel Hill murdered three young Muslim dental students. Why?

All this confounds me. Why do some folks continue to “fall back with the brutes?” Then I remembered.

My husband had a brother who was one year his senior. Both men were brought up in the same household by the same parents. My husband, Matt, is the least racist man I know.

But the brother? Here’s an example. When his brother learned Matt planned to vote for Obama in 2008, he said, “Oh, I forgot. You always were a nigger lover, weren’t you?”

Matt hung up. His brother died a couple of years later. Of bitterness, I think. Of hatred.

What caused one man to hate and the other to love? I hope God lets me know some day. 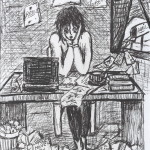