Medicine in mid-19th century America was barbaric—especially when a woman was delivering a baby. Mary Boland resolved to save lives of poor women as a midwife.

Physicians then were often barbers with little medical training. The “doctor” would deliver a baby using instruments from a surgery recently completed on a sick person, or even a corpse.

Thus, in the time of Shanty Gold, women were dying in epidemic numbers from something called childbed fever. 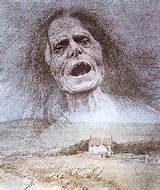 No one knew what caused it, and the doctors of the time, secure in their ignorance and arrogance, would not consider they were responsible for

women’s deaths due to a lack of cleanliness.

Until the latter part of the 19th century when French chemist, Louis Pasteur, published his findings. While Pasteur was not the first to propose the germ theory (Girolamo Fracastoro, Agostino Bassi, Friedrich Henle and others had suggested it earlier, with an experimental demonstration by Francesco Redi in 17th century), Pasteur developed it and conducted experiments that clearly indicated its correctness.

He managed to convince most of Europe that it was true. Today, he is often regarded as the father of germ theory.