In Shanty Gold, Kamua Okafor, the African slave boy who saves Mary Boland’s life on the coffin ship, gets a job sooner than Mary after they arrive in Boston.

Frankly, that pisses Mary off a lot. What’s wrong with the Irish, she muses angrily.

How did Kamua do it? Well, as a neophyte genius and son of an African witch doctor, his life goal is to learn to mix medical tonics. So, logically, he finds an apothecary. He manages to buy a top hat as well as a wagon and cart (I won’t tell you where he gets the money for that lest it spoil some of the narrative).

Mr. Mendel, who owns the apothecary, is an astute businessman. Kamua offers to deliver medicines to the tony crowd on Beacon Hill for one week at no salary. Mr. Mendel, knowing that some of the Brahmins on Beacon Hill fancy themselves abolitionists, figures they’ll be impressed with a Negro delivery boy spiffed out in a top hat.

He figures right. Kamua is a major hit with the wealthy crowd because, although he’s elegant, he doesn’t act “uppity.” This all happens in 1849.

Isn’t it sad that after 166 years, America still struggles with racism? Why are we so insecure that we must make some of our citizens “the others?”

In 1849, illustrators used to draw the Irish as dogs with tails. Today, instead of the Irish being “the others,” it’s the Hispanics.

And, after what happened recently in Charleston, it’s clear that hatred of Negroes still rules many of our citizens.

Under any of its guises, racism is a plague in America. A dirty secret we pretend doesn’t exist because we elected a black President. Which is why I personally think some people like Dylan Roof resort to violence. They can’t stand Obama because they think he’s “uppity.” So, they murder “the others” who look like him.

Let’s take a pledge together. Let’s pledge that one day, one person at a time, we’ll get rid of racism in this country that we love. Isn’t it about time? 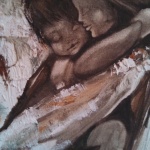