So, this is the tale of two women. Very different women. First, there was me, really years short of being a woman at 18 but, like most girls that age, quite certain I knew the scoop on everything. It’s wonderful to be 18 years old, pretty, confident, and smug that your life is going to be a dazzling road of utter joy. Especially since you have snagged the coolest boy in your small town. A handsome, smart, well-off young man who would two years later propose marriage. For purposes of continuity, I will call him Studly. But I’m getting ahead of myself.

The second woman’s name was Florence. Florence was 50 years old, had never married—Studly and his two brothers called her an old maid. Truth be told, so did I. We paid little heed to the fact that Florence had enjoyed a successful career in fashion merchandising, had traveled the world, and had spent a year in Italy. I later heard that she had been having an affair with an Italian man during that entire time. Gasp! Florence?

Well anyway, the way I met Florence was when Studly’s father decided to marry her. His wife had died the year before—a long, lingering cancer death that everyone in my town mourned. She was a much beloved figure there.

Turns out Florence had been Studly’s mother’s college roommate at St. Mary’s of Notre Dame a hundred years earlier and had always had a crush on Arters, her pet name for he who would become my future father-in-law.

So, after a very brief (some called it scandalous) engagement, Arters and Florence decided to get married. I was invited to the wedding and traveled to another state with Studly and his two brothers. The wedding was nice—simple and Catholic, and the reception boozy. Coming from a non-drinking home, I was kind of surprised at the amount of champagne Arters, Studly, and the other brothers consumed. Were I smarter, I’d have recognized a red flag that day, but, of course, in my smug stupor of “knowing everything,” I thought it was cool.

We drove them to a train station. They were heading to Manhattan for a honeymoon. As the train pulled away huffing and pouring out steam, the two newlyweds stood on a back platform and kissed. Yuck! My three male companions started tittering. “What’s funny?” I asked.

Studly said, “Do you think they’ll do it?” A roar of laughter went up from his brothers.

When I figured out what do it he was talking about, I shook my head and said, “No, they’re much too old.” After all, they were both 50 years old. Lord God almighty, nobody that old still did it. Meanwhile, I was coming from the naive place of virginity with absolutely no knowledge about what doing it was all about.

After I married Studly at age 20, my time with Florence was challenging. I had four babies in close succession, and Florence and Arters’ mansion was hardly child proof.

I spent most of my visits there trying to keep one of my little hellions (Arters’ word—not mine) from breaking some priceless chochka or smearing a poopie diaper on an oriental rug. I developed a terrible problem with shortness of breath during those visits and Florence suggested I needed an X-ray of my lungs.

My kids hated those visits and so did I. But as the years passed, my girls became civilized—relatively—and were welcome in the family manse until their own babies came along. Funny, isn’t it that history repeating itself can be amusing if you’re not the one responsible for the damages.

Anyway, years later, after alcoholism had claimed the lives of both Arters and Studly, Florence and I finally became friends. I had remarried by then, an Italian man who wanted to show me Europe. His immigrant family, though short on funds, always managed to travel back, whereas mine and Studly’s parents never considered leaving America.

It helped that my new husband, Matt, could speak a smattering of French and German and that travel to Europe then was pretty affordable. Fly there, rent a car, and drive through four or five countries, staying in Zimmer Freis or B and Bs that cost a song. I loved it!

Finally, though, I had a strong desire to see the land of my heritage—Ireland. Matt was game because he realized how frustrated I got with my inability to communicate in Italy, France, and Austria.

We went back to my hometown for a visit with my folks. While there, I called Florence. She invited me over to her apartment for tea, and I was really happy to see her again. Here was our conversation.

“Florence, we’ve been all around Europe now, seen the Alps in all their splendor, and now want to go to Ireland. I know you’ve been everywhere. I don’t want Matt to be disappointed in Ireland. It would break my heart.”

She smiled her ancient smile. By now, Florence was now a very old woman. “Jeanne, every country you’ve seen has its own beauty. So does Ireland. But there’s a difference.  Ireland is magical.”

She was right. We just returned from our third trip there. It has inspired for me the writing of my first novel, Shanty Gold, which will be published next year. Thank you, Florence. You were right. Ireland is indeed magical. 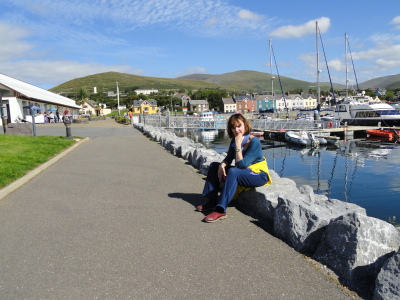