It was raining hard and a big puddle had formed in front of the little Irish pub.

An old man stood beside the puddle holding a stick with a string on the end and jiggled it up and down in the water.

A curious gentleman asked what he was doing.

So, he decided he would invite the old man to have a drink in the pub.

Feeling he should start some conversation while they were sipping their whiskey, the gentleman asked, ‘And, how many have you caught today?’ 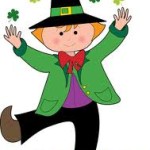