Who is the bravest person you have ever known?

I think many of today’s young adults would say Katniss of The Hunger Games. And she was quite a warrior, wasn’t she?

But she had to be tested.

What propelled Katniss into the arena was the need to save her little sister from the Games.

In Shanty Gold, Mary Boland becomes a warrior banshee on the coffin ship in order to save herself and her friend, Kamua. 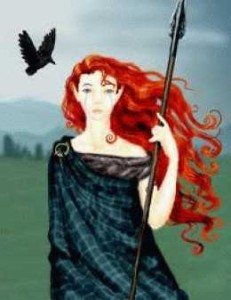 So what makes a warrior?

After my husband and I saw the movie, Saving Private Ryan, he was shaken and silent. I asked him why. His answer? “I’m not sure I would be brave enough to fight in a war like that.

He hadn’t been tested. Although he was in the Air Force, he never experienced combat.

I believe that anyone who has experienced motherhood can be a warrior. Wouldn’t you go into the arena to spare your child? I would.

That’s why I honor Toya Graham this Mother’s Day—that warrior mother in Baltimore who slapped her teen-age son silly when she saw him joining the fray of destruction. Others complain about her violence and language.

Not me—I would have done the same thing. How about you other mothers out there?