The controlling British Crown had developed a strong liking for the taste of beef, so all the meat harvested from Irish cattle was immediately shipped to England. So was all the grain grown in Ireland as well as the fish caught in her waters.

Thirty to fifty shiploads left Irish shores every day headed for England. Imagine the frustration as the starving people watched all their food shipped off in ships constructed from their trees. 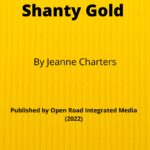 That left the Irish with one food staple—the potato. This was especially true during the winter.

When the Great Irish Famine began in 1845, it was because the potatoes came up black, infected by some mysterious disease. The devout Irish would sprinkle holy water on the crops in hopes of averting another disaster.

But the crops continued to fail in spite of prayer and anguish until 1851. That’s why in Shanty Gold, Mary Boland, having just buried her mother and infant sister, was desperate to get on a ship to America.

During the Famine, one-million people died. Another million emigrated to America, Canada, and Australia.

It was one of the most horrific examples of abuse and greed in human history.