I started traveling to Ireland ten years ago. It has become my (and my husband’s) favorite destination. Why?

Well, for one thing, it’s so startlingly green! Yes, it’s green where I live in Western North Carolina and it was green where I used to live in upstate New York. But nothing I’ve ever seen matches the green I see while flying into Shannon Airport.

Part of the view is that the rolling green hills are punctuated by squares of darker green hedgerows. These are property delineations, but make the land look like an incredible quilt of every shade of green known on earth or in heaven.

And that’s how Ireland is. A little bit of heaven. Like in the song.

Sure, a little bit of heaven fell from out the sky one day

And nestled in the ocean in a spot so far away.

And when the angels saw it, sure it looked so sweet and fair.

They said, ‘Suppose we leave it, for it looks so peaceful there.”

So they sprinkled it with stardust just to make the shamrocks grow.

‘Tis the only place you’ll find them, no matter where you go.

And they dotted it with silver, to make its lakes so grand.

And when they had it finished, sure they called it Ireland.

Yep, that pretty much says it. Write and tell me about your favorite place on earth, won’t you? 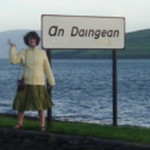